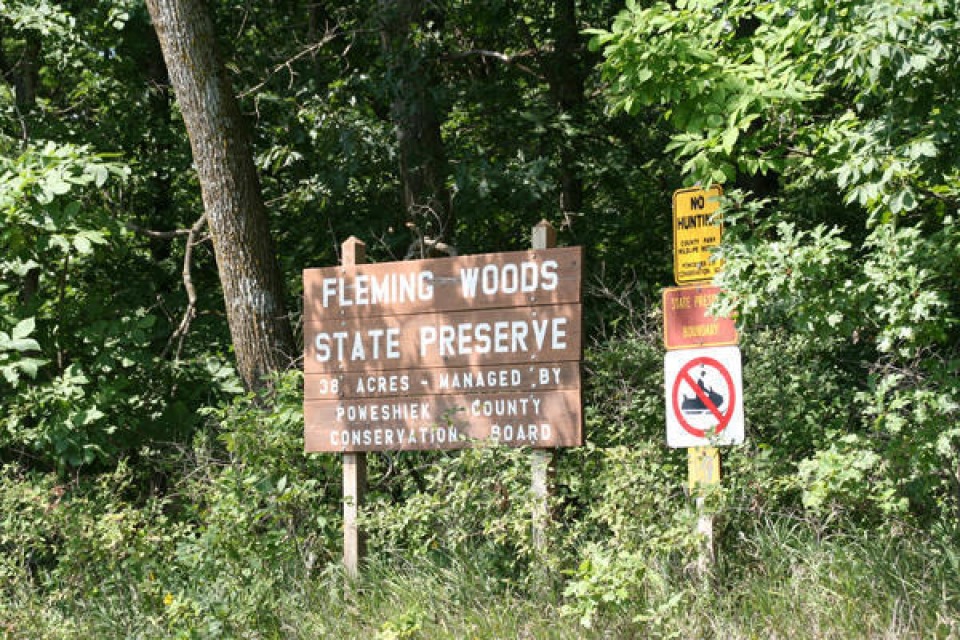 Fleming Woods is a 38-acre state preserve containing an upland oak woods. It is located three miles southwest of Montezuma, in southern Poweshiek County. Mr. and Mrs. Wayne Fleming of Montezuma donated this woodland to the Iowa Natural Heritage Foundation in 1982, which in turn donated the land to the Poweshiek County Conservation Board. It was dedicated as a state preserve in 1983.

The preserve has several forested ravines that are typical of the rolling landscape of Southern Iowa Drift Plain landform region. This upland forest is dominated by white oak, red oak, and shag-bark hickory, with basswood and maple appearing in the lower valley of the creek. Wildflowers are abundant in the understory, especially in the spring.  Yellow violets begin blooming in April, later joined by wild geranium, blue phlox, may-apple, and Solomon’s seal.  Yellow pimpernel, Jacob’s ladder, and false Solomon’s seal bloom throughout May and June.  By July they are joined by tumbleweed, purple Joe-pye-weed and zigzag goldenrod, which bloom among the maidenhair fern and rattlesnake fern.

Many activities are prohibited in a preserve, such as hunting, trapping, picnicking, camping, and collecting.  Visitors are welcome to walk through the area and observe the wildlife or wildflowers.